Skip to primary content
Anna Vandelman writes:
On May 17, 2017 Pomegranate Guild members were treated to a first viewing of completed “new/old” Chuppah. Kol Ha Kavod to Haya Nativ and to all the many members who participated in its fabrication.
Many Pomegranate Guild members joined in at the beginning of the evening to set up the amazing Chuppah to choruses of “wow,” and “how wonderful.” Graham Silver – whose mother Sarah was the designer of the original motifs – and his wife Ruth came to see it as well. Their children married under it in its almost-complete-state in the fall of 2015. And member Barbara Goldstein Nightingale married under it in September 2016.
Haya, as project coordinator and lead on the construction of the new chuppah, discussed the history of the Chuppah, and explained the alterations to design and material that she made to bring the Chuppah into the present. This included using more transparent fabrics, hand-dyed silks, shadow quilting with gold threads using wrapped running stitch, and devising a new top design and suspension system. Along the way, members shared anecdotes about their participation in stitching the old and/or the new-old chuppah.
The 27 members who came together to see the exquisite production stayed to discuss the future of the Guild..with leadership as a priority. 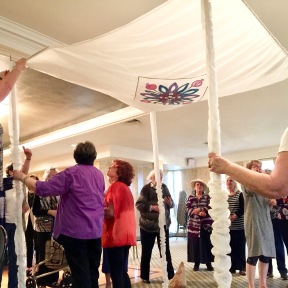 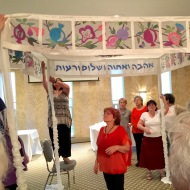 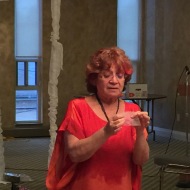 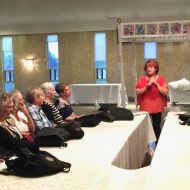 1 thought on “Under the New-Old Chuppah”

This site uses Akismet to reduce spam. Learn how your comment data is processed.